I had my second first author paper published a few weeks back in the Journal of Physical Chemistry A, and wanted to share it here. It’s an investigation of how the tiny little hydrogen molecule binds to open metal sites in metal organic frameworks.

Metal organic frameworks are like molecular sponges. They are very porous and small gases seem drawn to them, so researchers want to use them to store hydrogen gas for fuel cells. Another interesting use is to use them for purifying gases! Imagine if we could store and condense carbon dioxide right out of the air! Lots of potential environmental applications — problem is, no one really knows how they work.

We studied the hydrogen gas binding to a series of different metals in these metal organic frameworks. Here is a picture of one of the systems we studied. 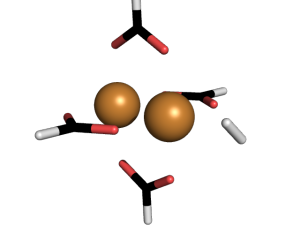 Hydrogen is kind of weird in that it has no charge and only two electrons. So why does bind to the metal centers? To understand why, we used a method called Symmetry Adapted Perturbation Theory (SAPT). This method was designed to study weak interactions between molecules. In addition to calculating the energy of the hydrogen sticking to the metal, it also decomposes the interaction into physical forces: like electrostatic, dispersion, induction, etc. It can be an extremely accurate method (we compared it to CCSD(T) energies and got pretty much the same results).

What we found might surprise you, as it did me! Hydrogen binds weakly (like ~ 3 kcal/mol weakly) and in many cases a good third of the interaction comes from dispersion forces. Now, if you remember from general chemistry, the more electrons you have, the greater the effects of dispersion become. Yet hydrogen — that little H2, with only two electrons — had an interaction largely mediated by dispersion (electrostatics was the other major component, which wasn’t too surprising).

The conclusion? Don’t ignore (or underestimate) your dispersion forces! This is very important to researchers who continue to study these metal organic frameworks, as they like to use density functional theory (DFT), which has some problems describing dispersion (if you aren’t careful).

You can read the whole paper here.