One of the cool things about working with real-time electronic dynamics is that you can make awesome videos.

I recently made a video of a resonant electronic excitation of hydrogen peroxide.

You can check out the video by clicking the picture below. 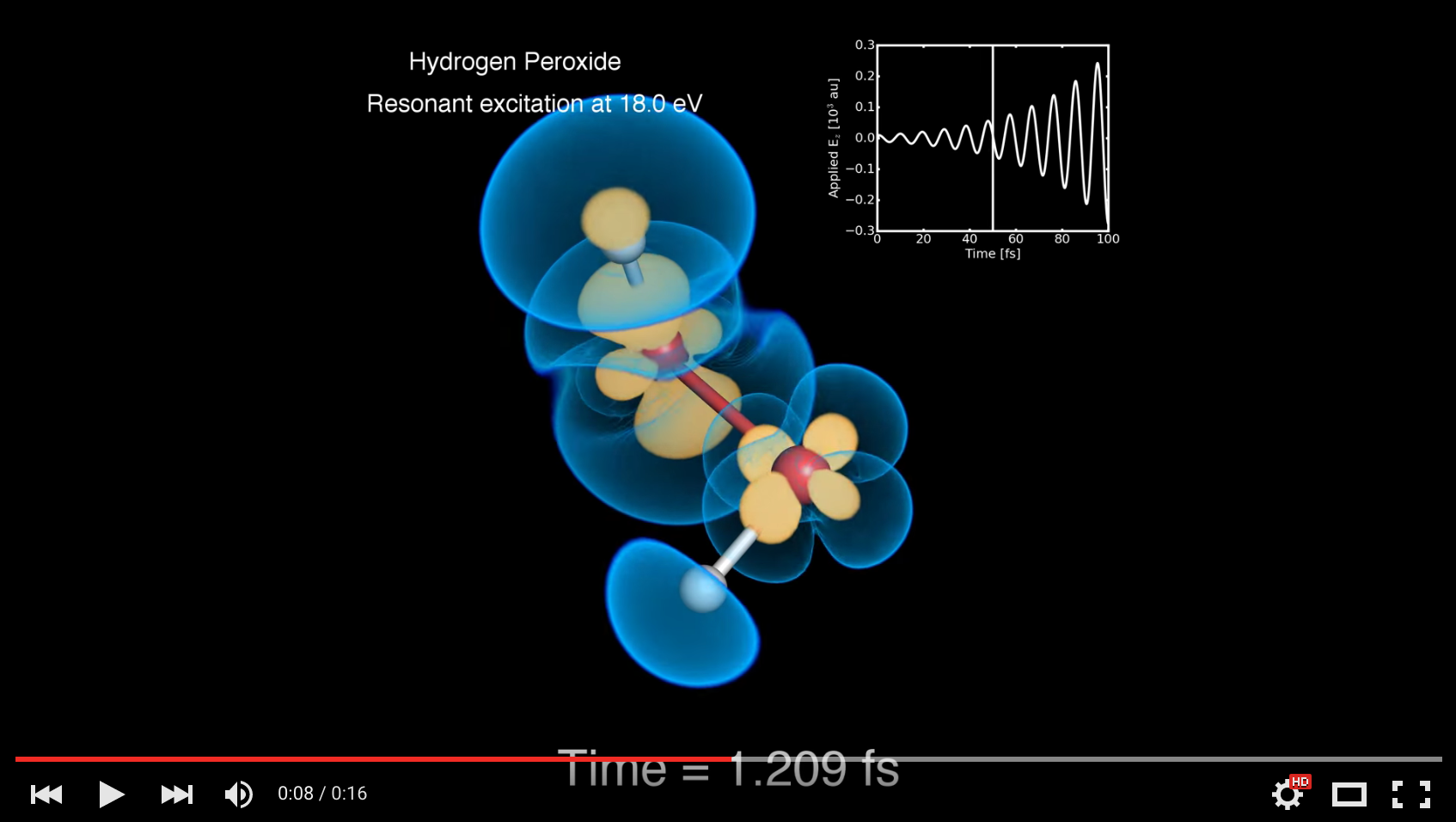 The video was made using the real-time TDHF module in Chronus Quantum. We visualize how the electronic density changes over time.

For this simple STO-3G model, hydrogen peroxide strongly absorbs at 18.0 eV. So we apply an oscillating electric field at the same frequency and the electronic density goes nuts. You can do this for any frequency of light, however.

In the future, we can look at more realistic systems with real time TDDFT.

It’s important because this type of phenomena underlies our ability to make better solar cells and faster computer processing devices.

Most of my development work is done on remote computing clusters, which are usually firewalled.

This means I can’t log in directly when I work from home. I have to log into a network machine, and then log in to my development machine from there.

It also makes it a pain to copy files from home to the remote machine (and vice versa!).

However, you can easily set up a transparent tunnel through your network-host that lets you (effectively) log on to your development machine as if it weren’t even firewalled.

Add the following lines (replacing network-host and development-machine with the names of your computers). You can name them whatever you want. Here I named each machine network and devel.

What this does is log you into the non-firewalled network-host, then establish a connection to the firewalled computer through netcat (nc in this case). You never actually see the network host, it acts on your behalf, invisibly in the background.

So, from your home computer, you can login directly to the development machine:

You can also scp directly from your development machine now, too.

Moving from Wordpress to Jekyll

I’m currently in the process of porting over my old WordPress blog to GitHub Pages, which supports Jekyll. I was getting tired of the bloat dealing with Wordpress, and wanted a cleaner, snappier website.

That and now I can blog in markdown, which is a great advantage to using Jekyll! From the terminal! And version control and hosting with git and GitHub!

I’m a little late to the party, but glad I made it.

I released some new code today that should allow you to easily rank NFL teams for any given season (back through 2009) using either the Colley or Massey methods. Both methods have several weighting schemes implemented, and with the Massey method you can additionally rank according to point differential or total yard differential.

You can check it out on my GitHub here.

I’ve become increasingly dissatisfied with my old NFL Colley ranking system and its derivatives, mostly because (a) I didn’t write it in an object-oriented style, and (b) it became very (VERY) hard to modify later on. The new structure, by encapsulating everything in a “Season” object should keep everything pretty self-contained.

Which gives the output

So obviously the NE Patriots were ranked #1 for the 2014 season with this method. You’ll recall they ended up winning the Super Bowl that same season.

So anyway, I’m starting over and making use of some great NFL APIs that I have found elsewhere on GitHub. In particular, I am using nflgame, which does a lot of the heavy lifting for me associated with scraping necessary data.

Recently, I found myself executing the same commands (or some variation thereof) at the command line.

Sometimes I just write a do loop (bash) or for loop (python). But the command I was executing was taking almost a minute to finish. Not terrible if you are doing this once, but several hundred (thousand?) times more and I get antsy.

If you are curious, I was generating .cube files for a large quantum dot, of which I needed the molecular orbital density data to analyze. There was no way I was waiting half a day for these files to generate.

So instead, I decided to parallelize the for loop that was executing my commands. It was easier than I thought, so I am writing it here not only so I don’t forget how, but also because I’m sure there are others out there like me who (a) aren’t experts at writing parallel code, and (b) are lazy.

Most of the following came from following along here.

First, the package I used was the joblib package in python. I’ll assume you have it installed, if not, you can use pip or something like that to get it on your system. You want to import Parallel and delayed.

So start off your code with

If you want to execute a system command, you’ll also need the call function from the subprocess package. So you have

Once you have these imported, you have to structure your code (according to the joblib people) like so:

So do you imports first (duh), then define the functions you want to do (in my case, execute a command on the command line), and then finally call that function in the main block.

I learn by example, so I’ll show you how I pieced the rest of it together.

Now, the command I was executing was the Gaussian “ cubegen” utility. So an example command looks like

Which makes a .cube file (50.cube) containing the volumetric data of molecular orbital 50 (MO=50) from the formatted checkpoint file (qd.fchk). I wanted 120 points per side, and I wanted headers printed (120 h).

Honestly, the command doesn’t matter. If you want to parallelize

over a for loop, you certainly could. That’s not my business.

What does matter is that we can execute these commands from a python script using the call function that we imported from the subroutine package.

So we replace our functions with the system calls

Now that we have the command(s) defined, we need to piece it together in the main block.

In the case of the makeCube function, I want to feed it a list of molecular orbital (MO) numbers and let that define my for loop. So let’s start at MO #1 and go to, say, MO #500. This will define our inputs. I also want the cube resolution (npts) as a variable (well, parameter really).

I’ll also use 8 processors, so I’ll define a variable num_cores and set it to 8. Your mileage may vary. Parallel() is smart enough to handle fairly dumb inputs.

(Also, if you do decide to use cubegen, like I did, please make sure you have enough space on disk.)

Now we need to call this function from within Parallel() from joblib.

The Parallel function (object?) first takes the number of cores as an input. You could easily hard code this if you want, or let Python’s multiprocessing package determine the number of CPUs available to you. Next we call the function using the delayed() function. This is “a trick to create a tuple (function, args, kwargs) with a function-call syntax”.

It’s on the developer’s web page. I can’t make this stuff up.

Then we feed it the list defined by our start and end values.

If you wanted to list the contents of your directory 500 times and over 8 cores, it would look like (assuming you defined the function and inputs above)

Essentially we are making the equivalence that

is the same as

Does that make sense? It’s just

Okay. Enough already. Putting it all together we have:

There you have it!