What does Trump talk about when he talks about COVID-19?

The code and details can be found on GitHub here. 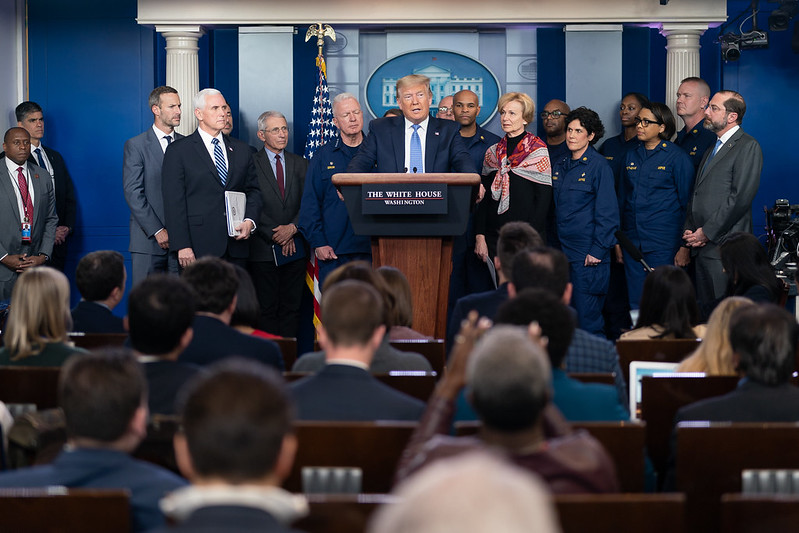 Since March 14, 2020, President Trump has given semi-regular press updates on the global COVID-19 outbreak. While this pandemic is impacting nearly every aspect of everyday life, it is important to understand how our leaders perceive and communicate the next steps as we tackle these unprecedented issues.

The New York Times (NYT) recently ran a fascinating article that painstakingly analyzed over 260,000 words Trump has publicly spoken about the novel coronavirus. It took three journalists at the NYT to review all these statements by hand, and they found that the President’s comments were particularly self-congratulatory, exaggerated, and startlingly lacking in empathy when compared to how often he praises himself and his administration.

I wondered, though, if a more data-driven approach to Trump’s remarks would yield any new insights. In particular, using data and natural language processing (NLP) to understand:

Given that all his remarks are publicly recorded on the White House webpage, I knew we had what we needed to answer these questions.

What does Trump talk about?

I wanted to get an idea of what topics Trump talks about during his briefings. To answer this, I used non-negative matrix factorization (NMF) to cluster keywords around certain topics. The number of topics and the interpretation of the topic is up to the scientist. There’s no right answer as this is an unsupervised learning problem, but I found that the topics made the most sense if you limit them to six. 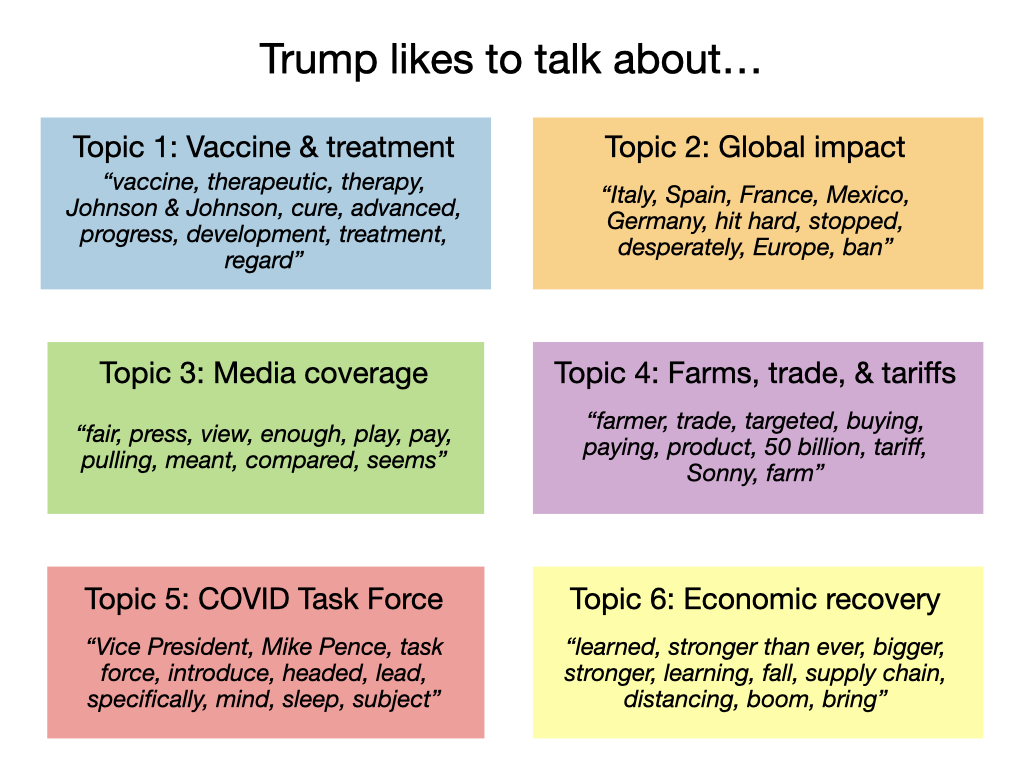 The most important keywords are listed and my intepretation of the topic. For example, the first topic is clearly talking about new treatments, cures, and vaccines for COVID-19. We should expect this to be a topic duing his briefings! Other ones make sense to me as well, like economic recovery. I was a little surprised (OK maybe not too surprised) how often he remarked on his media coverage. And the COVID-19 Task Force topic generally seems to bring up how well his administration is handling the pandemic. This is consistent with what the NYT article found.

You can see for yourself below!

In general, when Trump speaks his statements fall into one of these topics 18% of the time. That’s pretty good coverage for our topics given that we limit ourselves to only 6 topics. That said, relatively speaking, what does he talk most about?

When Trump’s statements fall into one of these six topics, Trump talks about farmers, trade, and tariffs nearly 25% of the time (4.3% overall). If we lump this group in with the economic recovery topic, it seems Trump talks about the economy well over a third of the time, nearly double that of the actual health impact (vaccines and treatment). Another quarter of the time is spent commenting on the media and how his administration is handling the crisis. These are rough numbers, but the pattern emerges that Trump’s preferred topics are the economy and his image (combining both press coverage and his administration’s COVID Task Force).

Keywords for each day’s briefing

Here’s an example of the important keywords found on March 14:

So here you can see that “mic” (or “microphone”) was a keyword of interest. Interestingly, Trump went on a bit of a rant during his talk because he was accused of touching the microphone:

Amusing that the model identified this (somewhat) bizarre tangent.

You can see for yourself below. Near the beginning of the briefings, things seem much more focused on health-care and government action (“proactive”, “self swab”, “buyback”). But as the economy progressively gets worse (see March 23!) then we see more of an economic focus (“exchange”, “cure is worse than the problem”). The economic shutdown is no small deal!

You can also see the importance of oil in April. It wasn’t a huge issue early on, but you see it become more important starting around April 3, peaking around April 9. That day, if you recall, was when OPEC made huge cuts in oil production. So naturally it was a topic in Trump’s briefing that day!

How positive/negative is Trump during his speeches?

We can investigate how positive or negative Trump is speaking during his briefings. To do this, we look at the compound sentiment for each briefing using the Valence Aware Dictionary and sEntiment Reasoner (VADER). Although it was trained on social media, it works well for our purposes. It ranges from -1 (negative) to +1 (positive).

You can see that, on the whole, Trump is pretty positive-to-neutral. Politically, I think this would be better to lean positive during the briefings. Of course, you don’t want to be too positive either during these tough times! 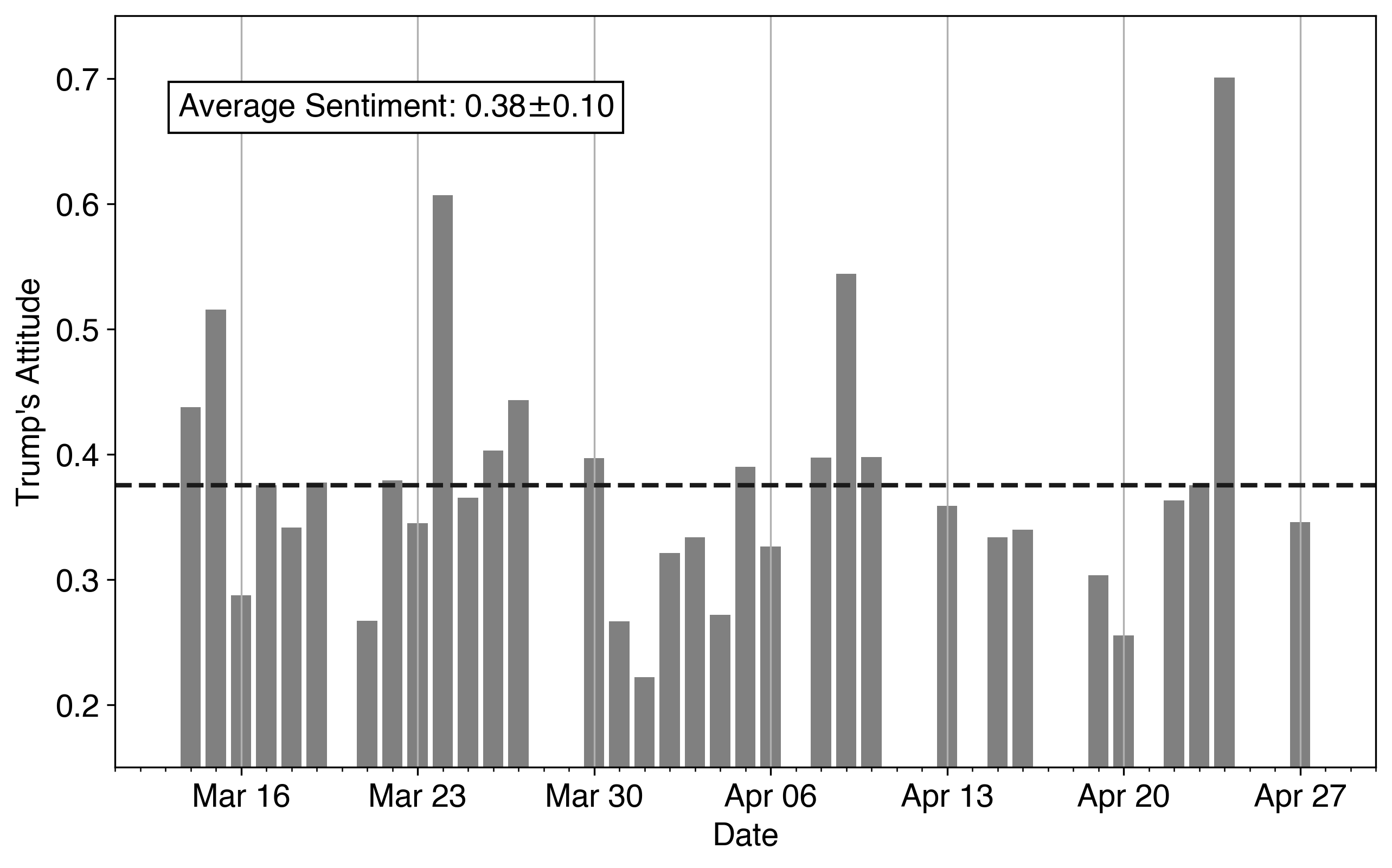 On average, his sentiment lies around 0.4, with a standard deviation of 0.1. So leaning positive, but by no means elated, which is probably the right tone to hit.

It’s interesting to note the spike in Trump’s positivity on April 24. Was he really more positive than usual? The model suggests so — and he was!

POLITICO noticed then same thing, and ran an article about it. After getting rebuked the day before for claiming sunlight and ingesting Lysol as a cure for COVID-19, Trump took a more conventional approach. In this particular briefing, he didn’t bash any political opponents, didn’t talk about any unproven cures, or argue with reporters. He only predicted quick economic turnaround. The article states:

For a ritual that in recent days has displayed some the trappings of a political rally, the most unusual thing about the briefing was how conventional it was … There was no touting of unproven remedies, no swipes at political foes; only prediction of a swift economic rebound, praise for governors who are rolling out plans to reopen their states and updates on his administration’s public health and economic response to the crisis that has killed more than 50,000 Americans. (POLITICO 04/24/2020)

Fascinating to see the change in attitude reflected in the VADER analysis!

Perhaps more interesting is to try and find patterns in Trump’s sentiment. Initially, I noticed the big spike in sentiment on March 24, as well as a pretty big drop in sentiment on April 1. On March 24, there was a big stock market rally, and on April 1, the market suffered a few days of losses. I wondered: could it be that Trump’s mood is correlated with stock market performance?

To investigate, I plotted Trump’s sentiment versus the percent change in the closing value of the Dow Jones Industrial Average. On first look, you can see that the briefing sentiment shows some correlation with changes in the DJIA. If the market is doing bad, Trump is generally more negative, and if the market is doing well, Trump is more positive. It’s tough to say which direction the correlation goes (correlation is not causation!) but given that Trump usually holds his briefings later in the day, I’m inclined to think the market bears more influence on his mood. But the issues are complicated and there are many more variables at play, so take it with a grain of salt. 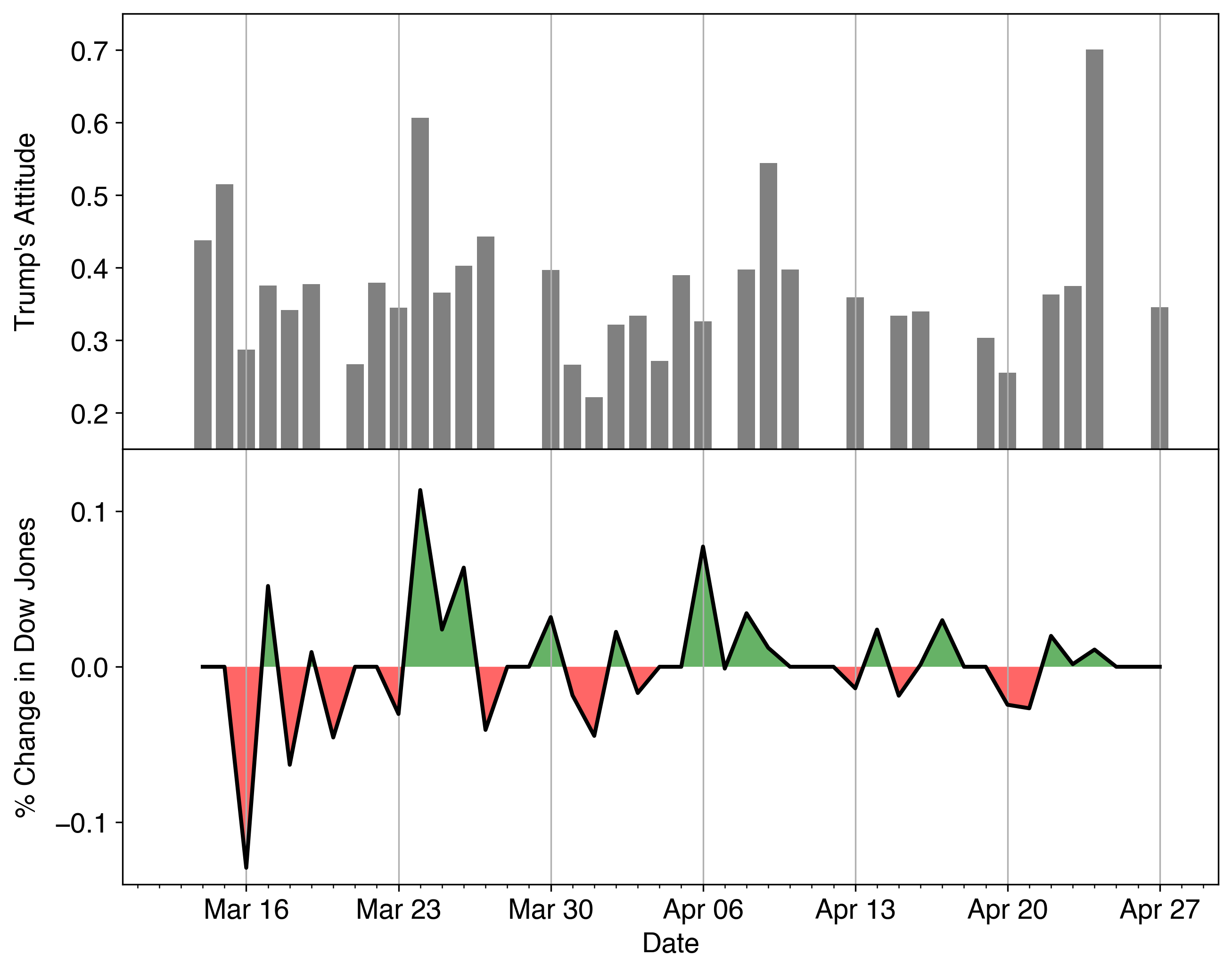 We can actually make the correlation between stock market and Trump’s mood a bit tighter. Below we have a regression plot, and find that the Pearson correlation is around +0.45. Note that we don’t include the cases where Trump gives a briefing on a weekend or holiday! (Which shouldn’t be correlated with the markets.) We also see that the R2 is 0.2 with a p-value of 0.03. So the Dow daily variation can account for 20% of Trump’s sentiment and is statistically significant (p-value < 0.05). This is good enough to say that there is likely a moderate positive correlation between Trump’s sentiment and the market performance. Makes sense, as he prides himself on his business acumen and being able to keep the American economy strong. (No comment if that corresponds to reality.) 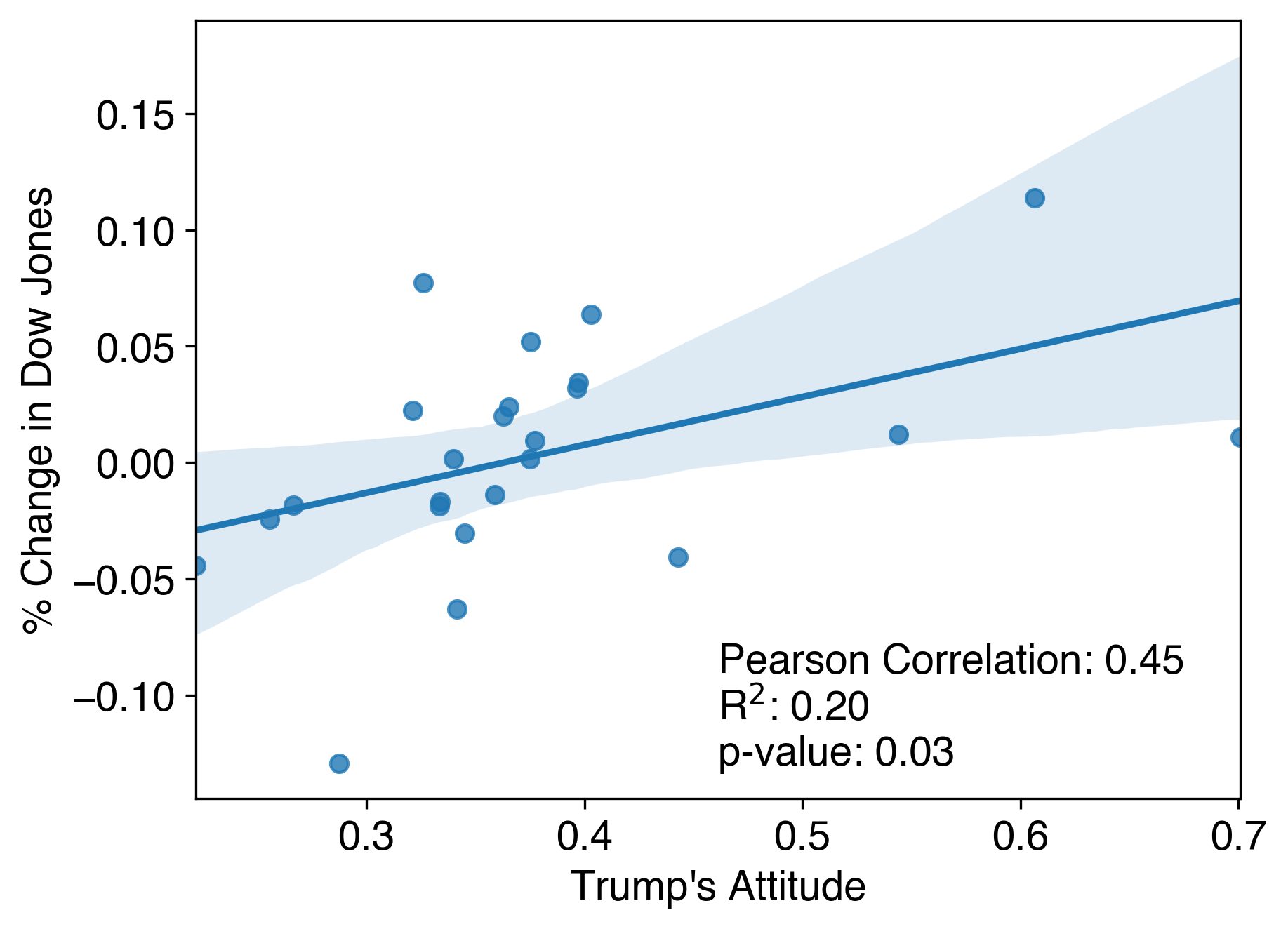 The raw data was scraped from https://www.whitehouse.gov/remarks/ using requests and BeautifulSoup4. For now, all we explore Trump’s statements during the Coronavirus Task Force press meetings (which as of today, May 6, may be ending).

The president’s name is listed before he speaks, so once the page is downloaded locally, it is relatively easy to extract just Trump’s statements. We treat a “statement” as any of Trump’s spoken words separated by a newline. This gave a variety of statements, usually around 3 to 5 sentences long. If any statement was less than 16 words, we ignored it (these usually are statements like “Thank you John, next question”, etc.) as these are not meaningful. If a statement was too long (longer than 140 words) we split them into smaller chunks. This foresight allows us to use the BERT transformer in future work, which in the default model cannot handle sentences with more than 512 word embeddings.

Once the raw text was extracted to a pandas DataFrame, we applied standard text-cleaning routines to make all lowercase, remove stopwords, and add bigrams and trigrams (so mayor, de, blasio is not three separate words, but instead is treated as mayor_de_blasio, which is much more informative!).